It was done on Tuesday. By a very severe Croatian who it turned out was the head of the dept which surprised me as I didn't think grand surgeons stooped to such things as ERPCs. Anyway after the slight debacle of the junior research fellow totally failing to get the difilucan stick in in the morning - she fumbled for 10 mins and tried three speculums/ae(?) before giving up and getting in a consultant who took 1 min - I was quite pleased to get the big gun. It only took about 15 minutes and there were only two painful things: the cannula (I'm still bruised) and the pressure of the scanner on my tummy. The lignocaine injections didn't hurt and I felt nothing except the speculum. All a bit of an anti-climax really. The sac was beginning to collapse so I suppose even my body would not have hung on to this pregnancy much longer. I am so glad I decided to go this route though as I have had very little cramping and less bleeding than a period. I only had one evening of gushing and mega clots ( this resulted in instructions to go back if it happened again which it hasn't) so really no comparison in the blood and gore stakes to expectant management and really I have had enough of these now to want the least worst option. On balance this has been all things considered a breeze at least physically.

I haven't been so weepy this time which is intriguing. I managed the whole of Tuesday without a tear. Even though the scary Doctor tried hard to make me miserable with his "at your age" speeches. He did redeem himself at the end with a couple of good lucks and hoping not to see me except in happier circumstances. Anyhow, it doesn't mean the whole business doesn't make me feel like shit though. I have been horrible this weekend for instance - snapping - OK shouting - at the kids for such crimes as accidentally beheading my new geraniums and failing to let me rinse their hair in the bath. I have always had problems with flying off the handle and being miserable and tired (I've had to work both the last two Saturdays) certainly doesn't help in the you need to count to 5 and not shout stakes.

I'm not sure what to do next. I really don't want to be in this position again. I suppose given we have got lucky twice its possible it will happen again. I'm not sure there is anything one can do with elderly eggs except just hope that chance gives us a better one is around next time if there is one. I have had a bunch of auto-immune bloods done by my rheumatologist who responded to my email late one Sunday night and had blood forms waiting for me the next morning so we will see what they show probably not much if anything. I still am conflicted given that:
a) we only ever wanted two and we have two gorgeous kids who probably don't get enough of the best of us as it is
b) I'm being a pretty rubbish parent of the two we have at times and doubt I will get any better/less tired as I get older
c) 42 was my cut off age
d) no more invasive treatment definitely
e) the husband really doesn't want to go here again.
Anyhoo, prepared to be bored with me going over this same old ground ad nauseam.

I promised some bucket and spade shots so here they are. First here is the slightly ludicrous Victorian pile we were staying in. Allegedly it belonged to a lady in waiting to Queen Victoria who was a big fan of the Isle of Wight. It was too big particularly as work called back the other family we were with earlier than expected but it was 10 mins walk from the beach and had a garden big enough for football and frisbee so satisfied most needs. 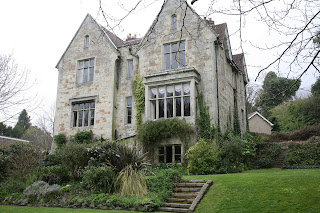 Here is the daughter on the beach - a back shot as the husband is somewhat chary of photos on the web: 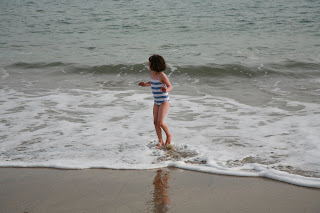 Here is the son - he is the one on the right with the curls. He and his mate sat for hours like this throwing pebbles at the wall after we told then not to hurl them at each other: 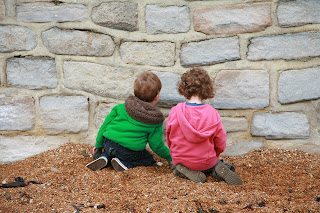 Sandcastle. Decorative elements by moi. Damn - too big for Blogger. Here my skills fail me sandcastle has to wait.

And to finish my wisteria - well actually next door's wisteria which by chance is almost totally in our garden - which is finally coming into full bloom as this represents most of my Bank Holiday activities in the garden : 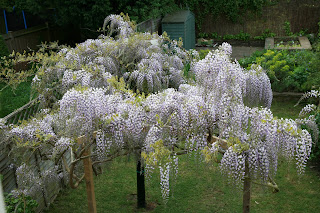 Well other than this which is the early stages of the new bread/pizza oven created by the husband. He makes the most excellent bread already so I am a bit nervous it will take months to perfect the technique in a wood fired oven but as he also has the good sense to go out and buy Nutella for a sad wife to eat with fresh baked bread in front of The Wire I am happy to indulge him: 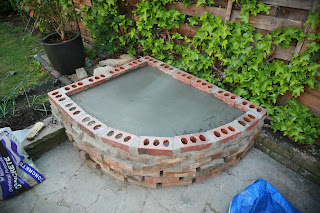 Betty M
I thought after 10 years of IF, 3 IVFs, 1 FET, 1 miscarriage and two children I was through with IF and loss. Two natural pregnancies too swiftly followed by two miscarriages has put paid to that notion and I appear to be back here again. At last though I seem to have one that is sticking around.