Its been 13 weeks and I have emerged from the fog. I also have a new toy on which to lounge on the sofa and write. Yup this post comes to you from an IPad. And an astonishingly fine thing it is, I highly recommend it. Although I'm discovering that as there is no iPad app for Blogger using it to blog is not the dreamy easy experience it should be. It is half my birthday present and half a present to self for getting through a grim few weeks at the beginning of this latest babe's life. But first before I tell you why having a ruptured appendix when you are having a baby is absolutely not the way to go here he is at on day one and below at 2 months: 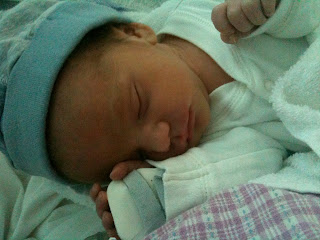 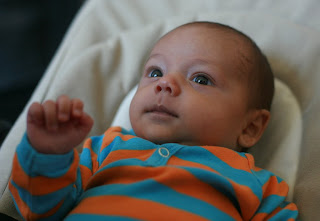 He is adorable. His brother and sister are doting on him, possibly slightly too much in the case of the younger one with mammoth bearhugs and attempts at carrying, but overall they have behaved very well given their spots in the hierarchy have shifted somewhat. Most of their miffedness has been inflicted on me.

In comparison to first two this one's arrival was not exactly how I would have planned. (Forgive me for the lengthy account that follows. It is of pretty marginal interest to nearly everyone but cathartic to write down.) I knew an earlyish birth was likely as the 1st boy turned up at 37 weeks and my consultant was predicting the same and was dragging the baby out in any event at 38 weeks but even so I had planned to work at least one more week. I left the office on the Friday with a to do list as long as my arm, a handover to my stand in to do and plans for haircut, wax and eyebrow threading all set up for week 37 (birth isn't dignified at the best of times but is even less so when as hairy as a gorilla). However by about 3 on Sunday morning I am sure I am having regular contractions so off we go down to the hospital dumping the kids on the nanny whilst my parents hot foot it from the countryside.

As a small political aside I know PFI is supposed to be crappy value for money for the taxpayer but I am so glad that the decrepit Victorian hospital which has treated me for various ailments over the years and which has also seen me through fertility investigations (although the ivf was over the other side of town), miscarriages and births has been replaced by a shiny new one where some thought has been given to what should be where including new shower rooms with better showers than we have at home and decent loos.

Anyhow I wasn't having discernible on the monitor contractions but I was in serious generalised pain. Morphine became my close friend and I was writhing in the labour suite for Sunday and in the ward for Monday and Tuesday. A merry band of Professors and random Drs hovered round my bed scratching their chins and peering at me. Blood tests revealed ridiculously elevated crp indicating an inflammatory response but ok white blood cells and no temp. Medical mystery was declared so more head-scratching and lots of iv antibiotics just in case. Thankfully by Tuesday pm I was actually in full on labour and that bit all went well thanks to a smashing Spanish midwife. I should have realised they were all super concerned as I was visited in the delivery room by what felt like the entire shift worth of drs including the consultant who are rare as hens teeth at the business end unless things are going tits up. Me however swimming in diamorphine so oblivious.

Second political aside - my world renowned teaching hospital would be totally non functional without the enormous numbers of non Anglo-Saxons who treat and care for the patients. Three cheers for immigration from other continents and free movement of EU workers I say. As well as my Spanish midwife, doctors from Greece, Egypt, Hong Kong and various bits of the Asian sub-continent were amongst those who looked after me that week let alone nurses, students, cleaners etc etc.

F (who was at that stage nameless) was born around 11 that night and as a 36 weeker was whisked off after a 5 mins to the special care unit to have a line put in and a load of antibiotics leaving me for an hour to wash and feel like a total spare part with no baby. They came back eventually but that was one long hour. At this point I felt much much better and assumed that the pain was history. Hah. More fool me.

The first night was a haze and the initial euphoria soon wore off. I remained in grim pain okish lying down but incapable of straightening up when I got out of bed to hobble to the loos. More professors peering and chin scratching and testing me for this that and the other. I was incapable of eating much and had caught some vile stomach bug too which was turning what was left in my insides to, how shall i put this explosive liquid. I had ultrasounds, prodding, tests galore and finally on the Friday afternoon a CT scan was done making me even more certain that I was appearing in my own personal episode of House (and secretly hoping that the cause of all of this was my lupus cos as you know on House it never is lupus). After the husband went to have supper with the kids the CT revealed the culprit as my appendix (although the lupus drugs might have been part of the reason I had kept going with an inflamed appendix without keeling over for so long). Late that night I had a surgeon swoop in to tell me I was off to theatre asap. Husband was summonsed. Desperate calls made to close Dr friends. Fit of morbid thoughts meant F got his name as I felt that I couldn't leave him nameless when I went under the knife. Down I went to 3 hours of oblivion.

The next day the surgeon wafted to my bed and told me yup it had ruptured and was "very nasty" and then promptly disappeared before i had the opportunity to quiz him further. Later another two gut doctors came by to say I was ok to go home as soon as I fancied. I fancied soon as regardless of shiny newness I just needed to get out. Plus I was becoming a prize sow as people kept coming by to tell me that appendicitis is super difficult to diagnose in late pregnancy, none of the Professors/surgeons had seen it in x years, no really it is very difficult etc etc so we left that evening. Big mistake but that is for another post as frankly I'll be amazed if anyone is still awake by the end of this!

Just re-read and realised I have left out some very important people in this account - F, who had some minor issues of his own, and the Husband who manfully made the creaky NHS function (somethings don't change with shiny buildings) and pressed, cajoled and generally gave a very good impression that he too was a Dr in order to get people moving on tests, bloods, BPs you name it as I was in no fit state. But more of them in that other post.
Posted by Betty M at 20:31

Wow - that sounds scary, and it sounds like you got really lucky that they DID figure it out eventually.

And, oh my! but that's one beautiful baby! Congratulations if I haven't said it yet!

Wow, that does sound dramatic. Baby cute, though! Glad you are coming through on the other wise.

So... labour, appendicitis, AND a tummy bug - concurrently?!

What a beautiful, beautiful baby. Bless.

The appendix actually BURST? Hot DAMN, but that's unlucky bad. I am so sorry. How miserable to have the arrival of the Adorable F messed with like that. Good Lord what an epic drama. Many hugs.

That's quite an episode! And still, you emerge from the fog after only 13wks.

Fantastic to hear from you, and thank you for the pictures of your lovely boy - he is gorgeous!

Sorry to hear about all the drama, good news that you are thoroughly on the mend now.

Now THAT is a dramatic beginning. WOW.

I'm amazed you've managed to emerge to blog at all with that sort of birth story!

Also, the NHS is rather like the public system here. Horrid.

I say that and i work in it.

Holy crap that is one birth story.

Congratulations to you for your gorgeous baby.

And, you know, surviving a ruptured appendix.

I am also in awe that it's taken you only 13 weeks to come out of the fog. That's pretty damn quick, if you ask me.

Oh my goodness Betty! First of all what a beautiful boy -- but what a frightening thing! You write so well about the chaos of it all -- for me birth was intimidating enough let alone with complications!

and I'd echo the voices here -- welcome back -- I know how hazy it is in those first few months -- I can't wait to hear more!

That is an incredible birth story!!!

He's beautiful. Hope he's bringing many smiles to your life.

Betty M
I thought after 10 years of IF, 3 IVFs, 1 FET, 1 miscarriage and two children I was through with IF and loss. Two natural pregnancies too swiftly followed by two miscarriages has put paid to that notion and I appear to be back here again. At last though I seem to have one that is sticking around.